Katrina Stevenson most recently appeared onstage with Jobsite Theater in Hand to God (Margery), Romeo and Juliet (Tybalt), A Midsummer Night’s Dream (Puck), and in the air in Shockheaded Peter. Other memorable Jobsite performances include Edgar and Emily (Emily Dickinson), Orlando (Orlando), The Maids (Claire), Dancing at Lughnasa (Maggie), and The Tempest (Ariel). She has also been seen at Stageworks in Murder on the Orient Express (Greta), The Great Gatsby (Myrtle) and Psycho Beach Party (Marvel Ann), and at American Stage in Intimate Apparel (Mrs. Van Buren) and It’s a Wonderful Life (Lana Sherwood). Katrina holds an MFA in Acting from the University of Florida and a BA in Theatre Arts from the University of Northern Colorado. When not at the theater, Katrina loves flying on aerial silks and running after her dogs, Tink and Sherlock.

All the Great Books (abridged)

Crimes of the Heart

The Complete History of America (abridged) 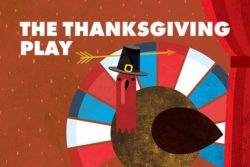