A-game acting ... These two actors could probably make the listings on eBay entertaining ... [Potenza] gives us a Poe who’s miserable, vain, haunted and exhausted from running ... [he] is one of the Bay area’s best actors ... Stevenson, meanwhile, is a coy Emily Dickinson, shrewd and self-possessed, just a little censorious of the famously raffish Poe, and not a bit attracted to the big bad world outside her window. David M. Jenkins directs capably ... The original music of Tom Kersey and Jeremy Douglass is a kind of third character in the play, setting the mood for some scenes and quietly undergirding others. - Creative Loafing Tampa

In January 1864, reclusive poet Emily Dickinson receives a surprise guest: Edgar Allan Poe. Although Poe died 15 years prior, he arrives quite alive and just as energized by death as ever before—one could say death kindly stopped for Emily, after all. Though the evening pits the pendulum of both poets’ personalities against the other in this comic fantasia, Emily and Edgar find they have a lot in common despite their differences. The heart tells the tale, you know.

Because you love to laugh. Because you can’t wait to get out all of your Halloween decorations every year. Because you’re a lit nerd, a lover of American history, or both. Because you’ve been simply dying for a good reason to release your inner spookykid. Because you love those TV episodes where they crossover two literary or historical figures in a meeting that never really happened but is pretty darned cool to imagine in a what-if. (And, hey, it’s another 90-minute show. Y’all seem to love those! You’ll have plenty of time after to go talk about it or get on with your life.)

We’ve got a big ol’ soft spot for Halloween, it’s been the only “holiday” we’ve celebrated by producing a show for the past 20 years. We adore the playfulness of this script. We’re thrilled to bring another non-published work for Tampa audiences, this show has in fact only had one other professional staging. We also really love that this script combines these dark literary giants (played by our own Paul J. Potenza and Katrina Stevenson), both obsessed with death in their own very unique ways, and manages to make it a laugh-out-loud comedy.

I sincerely hope you’re entertained by this play. It’s how Brecht would have wanted it, and it’s certainly how I want it. I know the 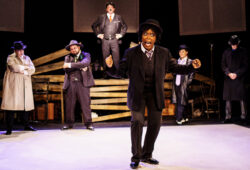 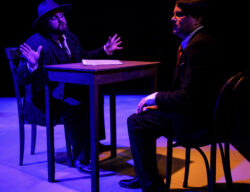 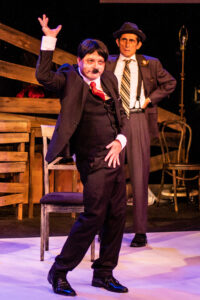