This time 20 years ago, five of us were plotting our first move: a bill of two one-acts to take place at the Silver Meteor Gallery in Ybor City. One was about serial killer John Reginald Christie, the second was inspired by the brutal regime of Augusto Pinochet. While we may not have performed those shows until late November in 1998, the seeds of our Halloween tradition were clearly already in the ground. The next year we tackled our biggest show to date, Clive Barker’s History of the Devil, which was rewarded by also being our biggest success up to that point in time.

(Speaking of 20 years, I would be remiss if I didn’t take a quick moment to implore you to join us for our official Jobsite Rocks! 20 party in celebration of this major milestone. We have so many ways you can participate including a VIP or standard GA ticket and we are also still looking for volunteers, product and service donations, and of course acts for the variety show! Reach out if you’re interested in knowing more about getting involved, otherwise I hope that you at least book your tickets soon to join us as a guest!)

Back to our favorite time of the year … It’s been a gas to bring the Tampa Bay area so many kooky-to-creepy confections for all of these years. As I look back I’m impressed not only by the sheer number of shows but also by all the many styles we’ve tackled. Where not every single show could be truly called “horror,” they’ve all owned darkness in unique ways.

Consider the real-life dramas explored in quasi-historical shows Quills (Marquis de Sade) and Bloody Poetry (Mary Shelley, Percy Bysshe Shelley, Lord Byron). The writings of those literary figures continue to inspire across many corners of our culture. We’ve also explored Mary Shelley’s most famous creation in After Frankenstein as well as the baddest literary bloodsucker of all time (sorry, Lestat) in a wonderful theatrical adaptation of Bram Stoker’s Dracula (that stood as our most successful production of all time until just a few weeks ago when Hedwig finally staked it). A few productions have even offered tales about fictional writers of the macabre who find themselves wrapped up in some sort of nasty business or another — Mindgame and The Pillowman.

Literature not your thing? We’ve covered your creepy-kid pop-cultural thirsts in other ways by bringing you a special effects-laden spectacular in Night of the Living Dead, a show that saw some actors spending hours a day to be put into zombie make-up by a student of the man himself, Tom Savini. There was also that time we served up a seriously funny, perhaps criminally crass parody of The Silence of the Lambs — SILENCE! The Musical. What about a comic burlesque of an evening called Vampire Lesbians of Sodom that sends up everything from drag to old b-movies to Blue Man Group? Yep. We did it.

So, you think a musical with Hannibal Lecter crooning a ballad with lyrics about being able to smell a you-know-what or Buffalo Bill singing an upbeat toe-tapper asking if a girl is a size 14 is twisted? What about a head-banging queer-fueled rock opera about everyone’s favorite axe-murderess-next-door Lizzie Borden? We made that happen, too.

I know a lot of theaters offer up a Christmastime special of some sort every year — because let’s be honest, they tend to sell — but we wouldn’t have our holiday show any other way than Halloween. It’s just too perfect. Whether the material is spooky, spoopy, silly, or downright terrifying there is just something exciting to me about drawing groups of people into a room together to deal with things (seriously or not or even somewhat in between) that go bump in the night or just simply the darkness in our hearts.

Two of our Halloween shows have been so successful we’ve done them twice several years apart — the aforementioned History of the Devil and of course our monochromatic masterpiece Gorey Stories. If any show is in line for a third incarnation it might be Gorey, it is easily among our most-requested.

Here in Tampa it seems that somewhere during the run of the Halloween production we get our first big break in the heat. For the first time in forever a day happens when I don’t mind actually putting pants on to go to the theater. If I’m really lucky I get to bust out a hooded sweatshirt and make the cast a batch of my special curry pumpkin and kale soup. It’s an annual time of change, even if you’re not into any of the other “mumbo-jumbo.” If nothing else, it simply starts getting dark earlier! 🙂 Even though I am a reformed goth kid, you’re simply not taking away my enthusiasm for this time of year. It’s always such a pleasure to offer you a little something special for the season. Blame my parents for letting me grow up on a steady diet of classic Universal horror, ’70s slasher films, and TV shows like The Munsters and Addams Family. Or maybe it was just all those years of doing Rocky Horror in high school …

Sometimes the treat is even masquerading itself. I don’t think many folks really connected that our productions of both Macbeth and Titus Andronicus were also in celebration of the time of year when the veil is at its thinnest — though I thought perhaps all those gallons of blood on stage (and, yanno, the witches and whatnot) should have given it away. Even Shakespeare knew how to throw it down and get audiences into it with a little bit of the supernatural.

Perhaps some might look at our current production of Edgar & Emily as a stretch for a Halloween show (well, ok, at least one local critic did) but I don’t think it is at all. In fact we chose this production very consciously for this time of year. After all Emily Dickinson and Edgar Allan Poe are two of our darker literary figures and while they couldn’t have been more different personally and in terms of the bodies of work they left behind they were just a bit obsessed with the same topic — death.

In terms of comedy, E&E is not unlike our productions of Gorey Stories and SILENCE!. There is PLENTY to laugh at, not just in spite of but in the face of what might be considered heavy subject matter. Like Bloody Poetry and Quills it offers us a theatrical, theoretical look at real-life figures.

In my estimation, the balance of humor and thoughtfulness given to such — pardon the pun — grave concerns in E&E is a strength of the script. Our current times are so strange. Many folks are simply not ok. The weight of the world right now might not want to be met with the weight of a subject like death in a heavy-handed manner. I appreciate the gallows humor and witty wordplay in the show as much as I appreciate the fact that McDonough allows these two to get serious every now and again, and that he also knows how to not let it hang for too long without dropping a bon mot to help break the mood. This is how I am approaching so many subjects in life these days. Call it exhaustion, outrage fatigue, what you will. It’s necessary. Audiences continue to write in to us validating this notion, and so I am happy that the choice is being validated.

Beyond the topic of death Edgar & Emily has a lot to say about love, about our inner desires and fears, and about our inspirations and the creative spark. 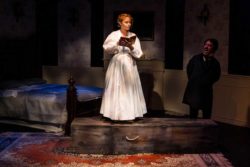 We’re very happy to continue a great Jobsite tradition with Edgar & Emily. This show is sure to transport you far, far away for the continuous 90 minutes it runs. If you can give yourself over to it I believe that you will laugh, I believe that you will think a bit, and perhaps most importantly for those of you who love theater like I do I believe you will witness two extraordinary performances from Paul and Katrina supported by some of the finest design work that we have offered up on stage.  That alone is worth a trip to the theater. I hope that you make it, the show is on stage through Nov. 4. 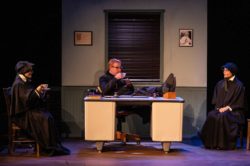