[Zachary Hines'] drag turn in the Charles Busch cult classic is like a master class in camp ... this production is marvelous fun that should be celebrated by all local theatergoers. Definitely see VLOS for the unapologetic mindless amusement and for camp done right. But mainly see it to experience one of the best performances of the year. – BroadwayWorld
Hines is ever-animated as he goes from sad, little sacrificial lamb, to fiery, classic Hollywood vamp, to a washed up, yet headstrong Las Vegas showgirl in 0 to 60. [Bohnenkamp] is a forceful spitfire, ready to take on any who would dare stand in her way. [She] leads each new persona with much of the same assuredness [...] it’s all so outlandish, but oh so enjoyable. – Only In Tampa Bay
Get a gaggle of salty friends together. Have a couple of cocktails. Throw some sass at the cast and the energy should be repaid in full [...] light and silly, like if vaudeville got a little drunk [...] The show is not for kids, but it's unlikely to seriously offend most [...] If you swap pearls for a sense of humor, you're going to have a great time at the show. – Tampa Bay Times
Busch's campy brand of depravity was perfectly executed ... [Summer Bohnenkamp] is a sheer delight onstage as one half of the eponymous duo; managing to create a fun blend of menacing and cattiness. As her nemesis [Zachary Hines] holds his own among the other Jobsite vets. – BroadwayWorld
outlandishly funny performances ... [Hines] is impressive in drag ... [Bohnenkamp] is calm, calculating and sure of herself ... the supporting cast, in multiple roles, is good ... a fun, silly romp – Tampa Tribune
a laugh-out-loud funny satire ... perhaps the show’s greatest feat is that by injecting the narrative with a good dose of silliness instead of sensuality, [it] is able to aim its biting wit at perhaps its most apt target -- the association of vampires with sex. From penis shaped spears to the more subtle wordplay, it runs the full gamut. – The Sunlit Tome
Previous
Next

Jobsite joins a nationwide tribute to the master of camp, 30 Years of Charles Busch – A Celebration, in conjunction with the company’s favorite holiday!

One of the longest running plays in Off-Broadway history, Vampire Lesbians of Sodom tells the saga of two fatally seductive vampiresses, a virgin sacrifice (Coco & Homo’s Zachary Hines) and her maker (veteran Jobsiteer Summer Bohnenkamp), whose paths first collide in ancient Sodom. Their bitter rivalry endures for nearly two thousand years with stops along the way in 1920’s silent movie Hollywood and contemporary Las Vegas. Moving between histrionics of classic horror cinema and the cheerful nastiness of the backstage melodrama of manners All About Eve, Vampire Lesbians sparkles with spectacle, homage and double entendre.

Jobsite’s production of Vampire Lesbians of Sodom features live music and musical interludes heavily influenced by vaudeville, English music hall, and post-war cabaret under the music direction of J. Elijah Cho. Expect unique takes on traditional and contemporary song and dance, from the 1916 torch song “Mon Homme (My Man)” to a certain theme-song from a bayou-based supernatural soap opera.

“Busch makes it very clear that this was never meant to be performed as a traditional play but as a burlesque,” offers director David M. Jenkins. “Initially I had crazy ideas about making the whole thing sort of scandalous, but that’s not really who I am or who these artists are. Probably not what the play is, either. It’s far more silly, sexy-silly I suppose. For those that don’t know Charles Busch, if you like the tongue-in-cheek camp of a Rocky Horror, a Priscilla, or John Waters flicks, you really don’t want to miss this show.”

Nothing escapes the demolition by laughter … The audience laughs at the first line and goes right on laughing at every line to the end, and even at some of the silences. That’s no mean achievement.

Some of Jobsite’s most successful and memorable productions have been focused around Halloween – from last year’s Macbeth to the monochromatic musical Gorey Stories to Clive Barker’s History of the Devil. Fans of last year’s season opener, Hedwig and the Angry Inch, will certainly not want to miss this drag-tastic romp of a burlesque that also features Spencer Meyers, who played Hedwig, as a vampire hunter hot on the heels of our heroines.

We’re happy to announce a partnership with the Ybor Youth Clinic for the Fri., Nov. 7 performance of Vampire Lesbians of Sodom. $10 from every full-priced admission will be donated back to this important community organization. 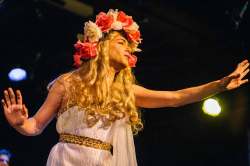 Thanks to everyone who had a hand in making 2014 our best year to date in just about every measurable way.

Check out the soundtrack for Vampire Lesbians of Sodom. 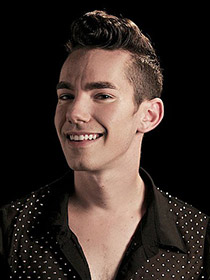