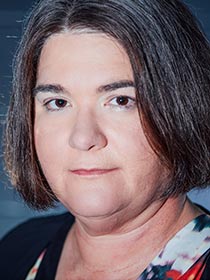 Karla Hartley is currently the Producing Artistic Director for Stageworks Theatre in the Channel District. She received a BFA in Theater Studies from Boston University in 1992 and is the owner of three Theatre Tampa Bay awards for Best Director.

She was named Best Director 2009, 2012, 2014 and 2015 in the Creative Loafing Best of the Bay Awards as well as The Artist Most Likely to Have Been Born On the Planet Krypton.

Directing credits include: Greetings, Ladies at the Alamo (Boston), The Seahorse, Christmas With Elvis, Girl Detective, Cut the Ribbons (Florida tour), I Love You, You’re Perfect, Now Change, Always, Patsy Cline, The Goat or Who is Sylvia?, The Mystery of Irma Vep, Jewtopia, Hats! The Musical (Florida tour), Boston Marriage, The Rocky Horror Show (2008 and 2012), Waistwatchers, the world premiere of Party Animals by Kathie Lee Gifford and David Friedman, Respect, Little Dog Laughed, And Baby Makes Seven, Holiday Party of One, Sylvia, Company, Seven Homeless Mammoths Wander New England, The Wiz, A Few Good Men, The Sugarbean Sisters, God of Carnage, Moon Over Buffalo, Antigone and the international tour of Listen To My Heart, In The Heights and Red at American Stage, The Motherf**ker With the Hat, Lights Rise On Grace, This Wonderful Life and Broadway Bound.

She is happy to working at Jobsite once again. Love to Noreen and Marcel.