In 2002 we produced a bloody, raw, and ambitious version of Titus Andronicus as our first full-length foray into the classics. We picked a lesser-known play, and one we knew we could turn into a spectacle that our audiences would recognize as 100% Jobsite. 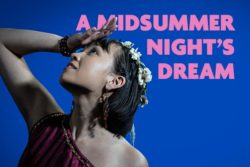 Titus had an original score, created by resident “sound ogre” (his naming) Kevin Spooner. We didn’t intend to create a tradition, it just sort of happened. Since then we’ve focused more on “greatest hits” titles (Midsummer, Othello, Macbeth, etc) to appeal to both our audiences and to encourage as much participation as possible from our middle and high schools in our field trip program. This tradition is now our biggest annual offering: Midsummer broke every record for the company and even the venue, we employ more artists at higher rates for these productions that any other, we continue to get national exposure, and so on.

Yes, Shakespeare generally sells more tickets than even our musicals or modern comedies.

You’re not the only one who’s likely surprised. My colleagues around the country are baffled when I say these shows are our bread and butter — they also allow us to take at least once risk every season as we know we can offset a loss through a big win.

We still work with a composer, though our “sound ogre” moved on years ago. Jeremy Douglass has now contributed to four of these productions, with perhaps his most ambitious score yet here in Henry V — aided in large part because we’re doing this in the better-equipped Jaeb where actors can be on mic, allowing us to REALLY crank it. 🙂  True to the period of time I was inspired by Henry V, the thumping score is influenced by ‘90s industrial music (listen to the Spotify inspiration list).

But why this play? And why now? I have a story …

In the spring of 1990 I was toward the end of my sophomore year at Douglas Anderson School of the Arts. I was in a class where, over the course of a few periods, we watched the just-released Kenneth Branagh film of Henry V.

Of course I’d read Shakespeare, and had both seen and worked on Jacksonville Actors’ Theater productions in Metropolitan Park, but something clicked in such an intense way upon watching the film. I remember not wanting to leave it until the next period. I’ve frankly wanted to do Henry V since then. Its’ lessons about leadership, citizenship, conflict, and coming of age and into your own have followed me through my life. These themes are timeless, but I’d argue more relevant than ever right now.

In Henry V, Shakespeare offers not only the perspectives of upper classes but of the lower, not just high-borns but foot soldiers, the play contains as many stirring motivational speeches about fighting for what’s right as it does warning against the horrors of war. The tensions between leading and following, war and peace, bravery and cowardice, violence and love, divine will/national identity and personal responsibility appear around us in just about every debate. In Henry V, England is coming out of a time of darkness and, well, I guess we don’t know anything about that … (/sarcasm).

I’ve cut the text almost in half for a few reasons, both artistic and practical. It now runs 2:05 including a 20m intermission. I’ve never cut one of these plays this much, but boy howdy does this thing FLY now! My approach in many respects is more Brecht than traditional Bard, whereby we’re choosing to play up the theatricality (and even meta-theatricality) that not only plays to our strengths as artists but keeps things more immediate and exciting. Some 2 dozen or so remaining (!) characters in this cut are played by just 8 actors (informed primarily by our currently reality) — Adam Workman, Roxanne Fay, Ned Averill-Snell, Cornelio Aguilera, Brian Shea, Lizzie Kehoe, Kara Sotakoun, and Katrina Stevenson. 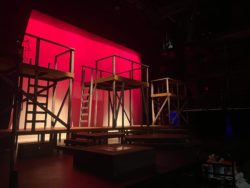 As this show comes to together I can hardly contain my excitement. So much amazing design and acting colliding, so much energy in that room. Even though I recognize Henry V is not quite the household name as is Romeo & Juliet, as is true with most Shakespeare audiences will recognize more than they think. Henry V has also appeared recently in pop culture through the film The King and the TV series The Hollow Crown. It’s a rousing, stirring epic and the “band of brothers” (and sisters) we’ve assembled are sure to not disappoint. Most have been a part of our Shakespeare company for years, and I have the one and only Giles Davies next to me guiding the production. I can’t ask for anything more. Henry V is as much his as it is mine. As it is Jeremy’s. As it is lighting designer Jo Averill-Snell’s or Jobsite newcomer Lizzie Kehoe’s. As it is all of theirs. Soon it will be yours.

And that’s another reason I love doing these shows. I align myself with former RSC director Peter Brook, that a concept for a production is a destination not a starting place with the firmest of paved paths. These collaborations always surprise me, inspire me, and feed my soul as both an artist and producer. These shows are part of our company’s very fiber and identity. 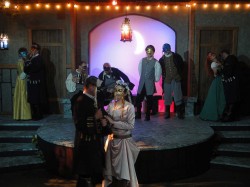 We get to share these shows with more people than come through our doors for anything else all year, and maybe they get inspired to try something else out. Nothing perhaps gives me greater satisfaction than from hearing from both young people and old how much they enjoy these shows, or how they never understood or connected to Shakespeare before visiting us, or that they’ve never seen someone who looked like them on stage doing work like that before and how much that meant.

Shakespeare isn’t a museum piece. It’s NOW. We pride ourselves on how we can make that room crackle with electricity. Henry V has moments that are just downright PALPABLE. I’m. Pumped. 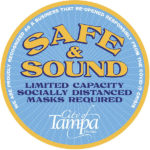 I hope you make it out. We have a $50 special on tables for the first preview on Wed., Apr. 7. Use code BARD and score one (seats 1-4) in a premium location! We’re expecting another sold-out run, this time for the first time in the reconfigured-for-distance Jaeb Theater where we are committed to everyone’s health and safety. The show is on stage through Apr. 25.