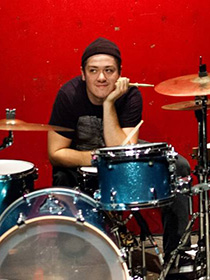 Elwood Bond is a performer and educator residing in Tampa, Fl. Since 2013, Elwood has worked with Jobsite Theater and has performed in their musical theater productions of Hedwig and the Angry Inch, Return to Forbidden Planet, Lizzie, SILENCE! and The Threepenny Opera. He has performed with bands such as The Atom Age (Oakland, Ca), Joystick (New Orleans, La), Madison Turner (Richmond, Va), The Dollyrots (Los Angeles, Ca) and at festivals including New York Comic Con and Pouzza Fest in Montreal, Canada. Elwood has also worked as a drummer for artists and ensembles including Monty Montgomery from the British reggae band Siramyp, Jamaican rocksteady duo Keith & Tex, Master Chorale of Tampa Bay, Lumina Youth Choirs, and the cast of Cartoon Network’s Steven Universe: The Movie. Locally, Elwood is a senior Music Education student at the University of Tampa under the instruction of Dave Rudolph. Elwood teaches music at School of Rock and performs in a number of bands including Vacancy, Perse, Skatune Network, Monument Beach, and the Carrollwood Jukebox Big Band. Elwood would like to thank his family, friends, and Sara Farag for their continued support and Nate Irizarry for absolutely nothing.