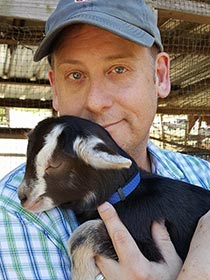 Of all the guitar players that call Tampa Bay home, Mark Warren

is unquestionably one of them. A childhood filled by Star Trek reruns, KISS albums, and roles in youth productions of Shakespeare classics (Hamlet at age 11 – really!) was followed by the requisite post-high school years of aimless garage combos. Eventually, Warren found himself in the midst of a golden age for Tampa Bay’s original music scene from the late ’80s to early ‘00s with stints in fondly remembered groups such as Mod-L Citizen, Leonard Croon Band, and Barely Pink. The latter quartet released three albums and an EP and in Japan were labelmates with Cheap Trick for about 20 minutes just before the band’s stateside label went belly-up. In more recent times, Warren and his Telecaster have been busy with “power lounge” legends the Vodkanauts (established 2002, currently on an open-ended hiatus), classic country quintet The Sara Rose Band, and prog-soul collective North Central. Warren is a fixture at WMNF 88.5 Community Radio’s ongoing series of tribute show/benefit concerts honoring artists such as David Bowie, Pink Floyd, The Beatles, and The Who. Warren’s previous musical experience includes Jobsite Theater’s productions of Return to The Forbidden Planet, LIZZIE, The Threepenny Opera, Hedwig and the Angry and the Straz Center’s SHOUT! The Mod Musical.