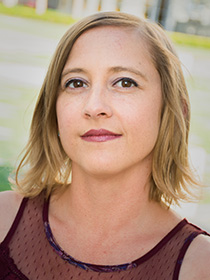 Emily Belvo graduated from Saint Leo University in 2009 with a BA in English and Specialization in Theater. She started her acting career with Eckerd Theater Company, a touring children’s theater group dedicated to educating children of all ages. Emily has acted in the Tampa area for the past 10 years and has worked with such companies as Hat Trick Theatre Productions (The Odd Couple: Female Version, Night of the Living Dead, Wait Until Dark, Proof), Tampa Repertory Theatre (The Children’s Hour, Hamlet), Stageworks Theatre (Five Lesbians Eating a Quiche), and The Space (The Laramie Project). With Jobsite, Emily has been a part of Doubt, Hedda, Dancing at Lughnasa, The Tempest, As You Like It, Vanya and Sonia and Masha and Spike, The Last Night at Ballyhoo, Orlando, and Occupation. Emily would like to thank her family and friends for their continuous love and support in all her acting adventures.