Coming in to watch the first run of A Skull of Connemara, I was frankly a bit stumped on where I wanted the design to go. For The Lonesome West, I could latch onto the two brothers and their trivial warring. The funk/blues/rock fusion I created came into place on its own. On the other hand, I had no idea for Skull. There’s a reference to Jimi Hendrix. Cemeteries are a natural fit for… Screamin’ Jay Hawkins. Put those two together, and next thing I know, I have some weird Dr. John meets Howlin’ Wolf compilation, which could sound pretty cool, but it didn’t match the show.

Finally, thankfully, I had an epiphany right in the last moment of the last scene. I wanted to hear Laura Marling slowly, warmly comforting Mick Dowd. 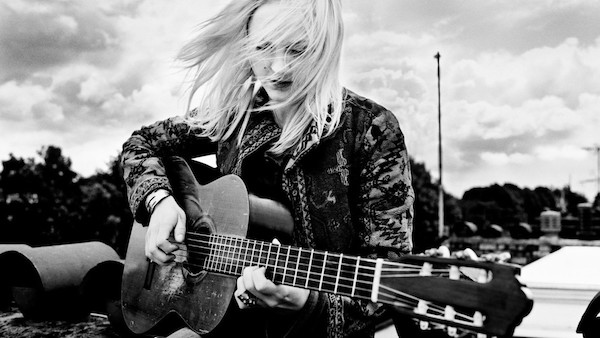 Flashback to a couple years ago, when I came across Marling’s A Creature I Don’t Know. A brilliant album, from which I even used a few tracks in the Lonesome West design. But there’s one song – “Sofia” – that I absolutely love, and I remember thinking, I’d love to use this in a show, but I can’t imagine any situation where that would ever occur.

Just after the run, I pulled up on my iPod (yes, I still use one). “Sofia” had the sound! Even better: the lyrics friggin fit?! (Well, maybe not all the lyrics, but the parts of the song I wanted totally fit!) Bang – I found my sound: a melange of Irish celtic meets bluegrass meets whatever that echoey, lamenting slide guitar ballad of the Western U.S. is. No, it’s not country, and no, it’s not alt-country. It’s… haunting Americana is the best way I can describe it. Whatever it is, I don’t have to be a musicologist to draw a ton of connections between Scots-Irish folk to American bluegrass and country. From both sides of the Atlantic, the color palette is very complimentary, and I’d wager that sound can work in an Irish play for an American audience.

So I’m driving home, listening to “Sofia” over and over, wondering where I can use it, and it hits me. There’s one character in the show who we never see, but she is always there: Mick Dowd’s dead wife Oona. (Relax, no plot spoilers here.) Could I craft a design that reflects her point of view somehow? Could I make something that hangs in the air, somehow representing the omnipresent Oona?

For that matter, could the soundtrack be totally female lead?

There is something about female folk that contains subjects, moods and thoughts that even the blues of John Lee Hooker or the genius of Bob Dylan can’t touch. I wasn’t doing this for the challenge of it. While Martin McDonagh typically leans very “male” in his characters and subject, his female characters make up for their infrequency with an extraordinary depth. Even amidst all of the balls out violent bravado in Inishmore and Lonesome West, there are some remarkably great female characters. His plays that incorporate a true emotional depth and warmth – a sensitivity that strikes down to the bone and soul (e.g. Beauty Queen and surprisingly, A Skull in Connemara) – typically present through his female characters. One of the largest exceptions is Mick Dowd, permanently affected by the seven year loss of his wife.

So, to answer the original question: yes. It turns out I can craft an all-female-led folk/country/bluegrass/celtic soundtrack that evokes the emotion and pace of A Skull in Commenara.

The Dana song, “All Kinds of Everything”: yeah, that’s an exception to all of the above. Martin McDonagh specifically wrote that one into the piece. It will horribly and wonderfully make sense when you see it. So here it is. The first selection of tracks from Laura Marling’s “Sophia” to Monica Heldal’s “Conman Coming” feature the show’s soundtrack, including intermission. All of that then inspired the preshow, included in the second part of the list, from Laura Marling’s “Devil’s Spoke” through Abigail Washburn’s “Red & Blazing”.

Thanks for reading and listening. I do sincerely hope you enjoy the show. It’ll be a good one.