We’re excited to announce the cast and creative team for SHOCKHEADED PETER! The production draws together many of the same minds who previously dazzled Tampa Bay area audiences with productions like A MIDSUMMER NIGHT’S DREAM, THE THREEPENNY OPERA, LIZZIE, HEDWIG AND THE ANGRY INCH, and SILENCE! THE MUSICAL.

SHOCKHEADED PETER is written by Julian Crouch and Phelim McDermott with original music and lyrics by The Tiger Lillies. 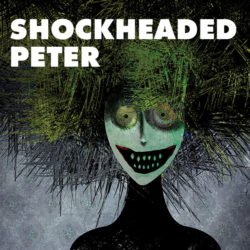 sobedient children like Young Harriett and her pyrotechnic tendencies, little Conrad and his insatiable thumb-sucking and a handful of other misbehaving youngsters who come to untimely and hilariously horrific ends.  This production will be a particular delight to fans of Jobsite’s iconic production of GOREY STORIES, which has now enjoyed two extended runs as part of our mainstage season.
SHOCKHEADED PETER reunites Jenkins and Douglass, who previously helmed Jobsite’s dark musical delights THE THREEPENNY OPERA, HEDWIG AND THE ANGRY INCH, and LIZZIE.
SHOCKHEADED PETER uses an ensemble of veteran Jobsite performers (Colleen Cherry, Amy E. Gray, Jonathan Harrison, Kasondra Rose, and Katrina Stevenson) to embody the kooky collection of characters backed by an on stage band (Jeremy Douglass, Mark Warren, Elwood Bond) fronted by a fantastical singing siren (Spencer Meyers). The show also incorporates puppetry and aerial silk routines (choreographed and performed by Katrina Stevenson and Kasondra Rose, who previously appeared together on silks in A MIDSUMMER NIGHT’S DREAM). The audience is guided through the darkly comic musical evening by a slightly sinister fourth wall smashing Master of Ceremonies (Paul J. Potenza).
The original production sold out 19 weeks at London’s Lyric Hammersmith Theatre and again at both New York’s New Victory and DC’s Kennedy Center. It won the 2002 Olivier Award for Best Entertainment. Jobsite is thrilled to offer the Florida premiere of the show.
SHOCKHEADED PETER was originally to be our last performance in the reconfigured-for-distance Jaeb Theater, after which we planned on moving back in the Shimberg Playhouse, but we’ve just announced our residence in Jaeb will continue through Feb. of 2022.
Share on facebook
Share on twitter
Share on linkedin