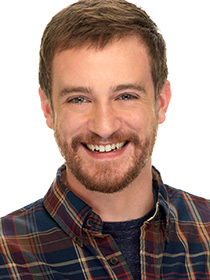 Adam was recently seen locally in 1984 and Dancing at Lughnasa (Jobsite Theater), The Mousetrap (Stageworks), Stupid … Bird (TampaRep), The Miraculous Journey of Edward Tulane (Thinktank),
Crossing the Bay (Palladium), and in Shruti Gupta Can Totally Deal as part of the 21st Century New Voice Play Festival at American Stage. Other favorite roles include Happy in Death of a Salesman, Perchik in Fiddler on the Roof, and Chip in 25th Annual Spelling Bee. Love to Mom.