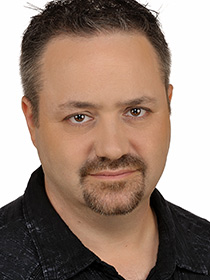 Owen Robertson is delighted to return to the boards at Jobsite. He was last seen as Prospero in Return to the Forbidden Planet. Mr Robertson has appeared in several productions at Jobsite: Quills, The Hot Nights for the War Wives of Ithaca, Hay Fever. Additionally he has performed in other productions throughout central Florida, including the Florida premier of Good People at Cornerstone Theatre. By day Mr. Robertson is an Adjunct Professor at Saint Leo University in theater as well as providing his own independent acting lessons through the Lab Theater Project at Stageworks Theatre. In addition to being an actor, Mr. Robertson is also an up incoming playwright, having written such works as So Long Life, Creating Monsters and Toby’s Game. Mr. Robertson received his acting training from George Mason University. He would like to thank his beloved wife for her tireless support of his art, without her he knows he is incomplete.