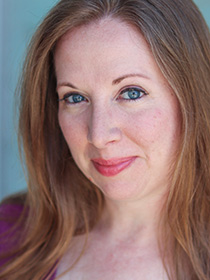 Jonelle M. Meyer [she/her]. Previous Steve Martin credits are Corky in Meteor Shower and Gertrude in The Underpants. Aside from her Steve Martin appearances, Jonelle has been a part of many other local productions including Dr. Jekyll and Mr. Hyde, Sylvia, Morningside, Dancing at Lughnasa, Vanya and Sonia and Masha and Spike, and the one woman run of The Search for Signs of Intelligent Life in the Universe as the charmingly homeless Trudy and 12 other characters. Jonelle is the creator and star of the Jobsite Digital Short; Too Far with Mort LaCourt. Her Mort LaCourt character won her a Creative Loafing Best of the Bay Award for “Best Fake Newsperson” in 2017. She also received the Jeff Norton Award for best actress in a Comedy for Shipwrecked! (Gorilla Theatre), was nominated by Broadway World as best actress for Almost an Evening (Jobsite) and was nominated as best featured actress by Theatre Tampa Bay for her roles in Gnit (Tampa Rep) and 7 Homeless Mammoths Wander New England American Stage). Jonelle is a proud graduate of Florida School of the Arts with an AS in Acting, a long time cast member of the sketch comedy troupe Some Sort of Show. She would like to thank Kari for this badass role, her momma for the love, her FLAQ family for their support and Pickles for being amazing.