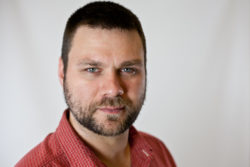 D Granke is a Director, Fight Director, and Intimacy Director based in Tampa Florida. Their Fight Direction has appeared regionally at Asolo Rep, Urbanite, American Stage, Jobsite, The Studio at Tierra Del Sol, Westcoast Black Theatre Troupe, Tampa Rep, Stageworks, Opera Orlando, St. Petersburg Opera, Studio 620, and a couple other places local and national. Their Intimacy work has appeared at Urbanite, American Stage, Opera Orlando, Tampa Rep, and the Studio at Tierra Del Sol. Currently, Dan also serves as stage director for Unto These Hills outdoor drama in Cherokee NC. They hold a BFA from the University of Michigan, and an MFA from Virginia Commonwealth University, and teach movement and acting at the University of South Florida. They are certified as a teacher and fight director by the Society of American Fight Directors, and as an intimacy director with Intimacy Directors and Coordinators.