Othello HELD OVER through Feb. 9

We continue our 20th Anniversary Season with another hit! Othello opens this Fri., Jan. 11, but performances are already selling so well that we’ve decided to open up the run through Feb. 9. Othello begins previews tonight, Wed. Jan 9, in the Shimberg Playhouse at the Straz Center where we are resident theater company. The added performances are Feb. 7-9, all at 8pm. 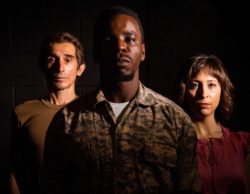 Backstabbing politicians, two-faced frenemies, gaslighting, treachery, true love and the never-ending cultural complications of a “black ram tupping a white ewe,” Shakespeare’s Othello might as well be talking about this year’s headlines. And in this production, it does. Othello features Jobsite’s signature modern spin on a Shakespeare favorite. The modern look and context of the show was decided upon by Producing Artistic Director David M. Jenkins because “while the play itself is fundamentally about jealousy and revenge, you cannot separate those threads from the tapestry of racism and misogyny it is woven into. I still believe that the themes roused in Othello – indeed the themes of all great tragedies – are still very much part of our condition today. That’s why I believe these stories continue to endure. Hopefully a modern context not only allows audiences to more easily access and connect to it, but asks them to consider how those underlying forces not only worked then but continue to work now.”

Jobsite has been producing full-length professional productions of Shakespeare since 2002’s Titus Andronicus. Our engaging productions have earned an invitation to apply for the prestigious NEA Shakespeare in American Communities grant this spring. We recently received a grant from Grow Financial Foundation to help offset the cost of weekday matinees for high school audiences, and the company still has free tickets available for students and schools in need. Write to info@jobsitetheater.org to learn more about these opportunities. Jobsite’s education efforts with Othello are also made possible by a generous gift from Hal Freedman and Willi Rudowsky. 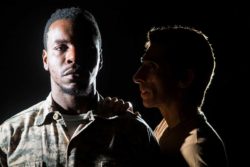 Othello plays Jan. 11 – Feb. 9, 2019. Tickets start at $29.50 and increase by performance based on demand. Preview performances are Jan. 9-10 at 8pm, with all tickets starting at $18. Othello is also available as part of a season pass for the remaining four shows of the season. Rush tickets to individual performances for students, seniors, military, and Theatre Tampa Bay members start at $18, and are available on remaining seats as of 30 minutes prior to curtain with cash and valid ID at the Straz Ticket Office window.