Othello synopsis and advice for the easily frustrated

We know some people can get frustrated by Shakespeare’s rich language and poetry. We can’t decide whether to laugh or cry when folks lament why his plays can’t be performed in English. In fact, 95% of the words used in Shakespeare’s plays are still in use today, even if our use of some of those words is not the same now as it was then. Shakespeare even invented a lot of words and coined phrases that are still popular to this day. We honestly believe that folks will have an easier time than they might think if they’re initially reticent to give us a go.

We always remind people that no one talked like that in Elizabethan England, either. This is dramatic poetry, and in most moments the “music” of the language can convey the meaning just as much as the individual words. The distinct style of poetry — iambic pentameter, a ten-beat per line structure — was used in part also to help the actor learn their lines in shorter time. 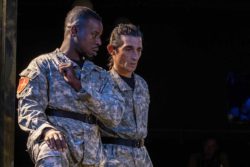 Many who simply hear the word “Shakespeare” and want to no doubt run for the exits suffer from what we believe to have been a bad introduction. Unfortunately, most Americans’ first date with Shakespeare came via a well-intentioned but perhaps ill-equipped English teacher attempting to convey their passion in a classroom. The problem with that is the Bard’s words are meant to be experienced and not read as literature (though you can certainly do that, it’s just not what it was written for).

We have a few pointers if you’re reticent about this whole idea to try to make it easier for you, and also a plot synopsis below that (spoilers!) if you might find that helpful. And, hey, if you try to give it a solid go with Othello and still can’t get your arms around this whole thing we’ll be back in March to thoroughly make serious fun of all of this business with The Complete Works of William Shakespeare (abridged) [revised]. 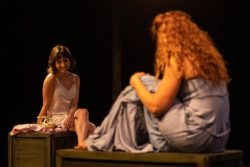 The play begins in Venice in the middle of the night. Iago and Roderigo meet to discuss their hatred of Othello. Iago hates Othello because he promoted Cassio to lieutenant over Iago, and Roderigo is a heartbroken, failed suitor of Desdemona’s. They decide to wake up senator Brabantio with the news that his daughter, Desdemona, has secretly married Othello, the general of the Venetian army and a Moor (an old reference to Muslim African). Brabantio interrupts an emergency meeting of the senate, where Othello and Desdemona make a case for their mutual love and defy the objections of their marriage. The Duke of Venice sides with Othello, who is then called to defend Venice from attacks of the Turkish fleet.

The action of the play moves to Cyprus, where we learn Othello has defeated the Turkish fleet. Desdemona, Iago, and Emilia have just arrived in Cyprus as well. The honeymoon doesn’t last long, as Iago doesn’t waste time enacting his evil plan. Iago tricks Cassio into getting drunk at a party celebrating the victory and Othello and Desdemona’s wedding, after which Cassio gets in a brawl resulting in him being stripped of his title by Othello. Iago then starts to plant the seeds that Cassio is more than just perhaps a drunk and is having an affair with Desdemona. He is aided by his wife Emilia who finds a handkerchief belonging to Desdemona that Othello gave as a gift, giving it to Iago even though she does not know why he wants it. Iago then tells Othello that he has seen Cassio with the precious keepsake, claiming Desdemona gave Cassio the handkerchief as a token of her love. In a rage, Othello demands that Iago help him by killing Cassio within three days time, promoting him lieutenant in Cassio’s place as the first half ends. 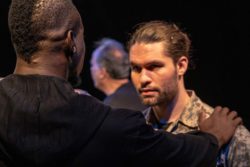 Jobsite’s Othello, second half (Shakespeare’s Act III scene 4 through the end of the play):

Desdemona searches for the handkerchief while trying to hide the fact she can’t find it from her husband. The more Othello trusts Iago, the more he distrusts Desdemona and Cassio. His jealousy begins to rule him. When Desdemona cannot produce the handkerchief, Othello flies into a rage. After he leaves, Emilia suggests that Othello is jealous, but Desdemona brushes this off, swearing he has nothing to be jealous about. To further seal Othello’s fate, Iago plans a conversation with Cassio while Othello hides to listen. Instead of discussing Desdemona, as Othello believes, Iago asks Cassio about Bianca, the courtesan in love with him. Enraged by what he think he sees, Othello asks Iago to kill Cassio that night and leaves to meet his wife with his own plan to kill her as a matter of honor.

Desdemona continues to be baffled by Othello’s sudden change in character but continues to try to get through to him, using Emilia as her confidante and sounding board.

Instead of killing Cassio himself, Iago tricks Roderigo into trying to kill Cassio, saying it is the only way Roderigo can win Desdemona’s love. When both men are wounded, Iago enters and kills Roderigo to hide the truth. Meanwhile, Othello meets Desdemona in their bed chamber. Although Desdemona protests her innocence, Othello’s jealousy has consumed him, and he smothers her. Emilia enters to deliver news of Roderigo’s death, raising the alarm once she sees the murdered Desdemona. Realizing what has happened, Emilia denounces Iago, and he stabs her and flees. Once Iago is brought back, the whole truth is revealed. Overwhelmed by his own guilt at what he has done, Othello kills himself. Iago is arrested and taken away.