Our 2017-18 season opener, The Flick, took place in a movie theater. Movie buffs are familiar with sneak previews of films in advance of “official” opening. Studios like previews to start drumming up excitement about a film and to get that word of mouth machine going in advance of an opening weekend (opening week box office is sort of a big deal — for both live theater and the movies).

With live theater previews are not quite the same thing, but in a way they are.

Live theater isn’t like a movie in that a film doesn’t change if someone is watching it or not. All the “work” has been done before it shows up at your local movie house. Live theater is much different because it’s a dynamic, emergent thing that truly only comes to life once the show’s last piece is in place — and that’s you, the audience.

An audience dictates more than you might think. There are reasons we crave the energy of a full house, or when it’s not full why we prefer to have the front of the theater occupied and not everyone sitting in the back, or why it drives us nuts to see people on their phones the whole time or carrying on a conversation — an audience is PART OF the live theater experience for everyone, including the actors and others watching the show.

The timing of a joke/bit of physical comedy or a moment of suspense can only be perfected in front of real people. When a light or sound cue depends on audience reactions (laughter, applause), these can also only be made just right by having real-time reactions. How an actor plays a certain moment hangs on the reciprocal energy provided by all of their scene partners, and that includes the audience. There are also practical considerations like the timing of a transition with actors moving things on stage from one location to another or performing a quick change, which they’ve only been doing for a few days before previews, and which often require tweaks up to opening night get just right.

We don’t truly know what we have in a show until we have who we’re doing it for with us. We might think a moment is effective, but of course we do — we’ve been staring at it for a month and know what it was supposed to do. An audience might walk in and not get it at all, or not find this thing funny, or be moved by another moment in any way. There are only so many times we can play pretend before we need real people. 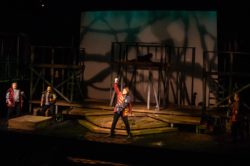 We take in all of the lessons learned during previews. The actors, designers, and technicians stay after preview performances to talk about things. We make adjustments. Previews are still rehearsals for us, but a rehearsal with an audience. This is also why we don’t invite the local critics or the Theatre Tampa Bay judges to previews. We’re still working!

Now, most of the time these changes are just tweaks, making a good thing better. Sometimes, however, they are a bit more drastic. During previews we are also still in the process of putting finishing touches on things. Perhaps there is still a bit more detail paint to go here or set dressing to go there that a preview audience won’t see. Maybe a costume is lacking a final bit of trim or an accessory. Perhaps a sound or light cue gets changed, added, or cut. Some theaters will stop preview performances to go back and get something right or to fix something in real time — giving audiences a real peek at the process — but we’ve not actually done that (*knock on wood*) in 24 years.

And, of course, previews are opportunities for the cast and crew to get gain confidence in front of people. Not because we’re actually scared, it’s just that we never know what we have until others see it and react. That’s always exciting AND terrifying. Usually after two previews, we know what we’re in for and what needs to be done to make a good thing better.

Where it is like the movie sneak preview is that we, too, hope audiences walk away talking the show up and get that word of mouth machine clicking.

You’re doing us a favor by being part of the process and we’re giving you a huge break on the ticket price for being a “test audience.”

If you’re a fan of the bargain we offer on previews, we’ve also started selling a pass to them, but it comes with some restrictions not placed on our regular season pass. Take a look.