The Trib’s Take on the ‘Titillating’ Maids 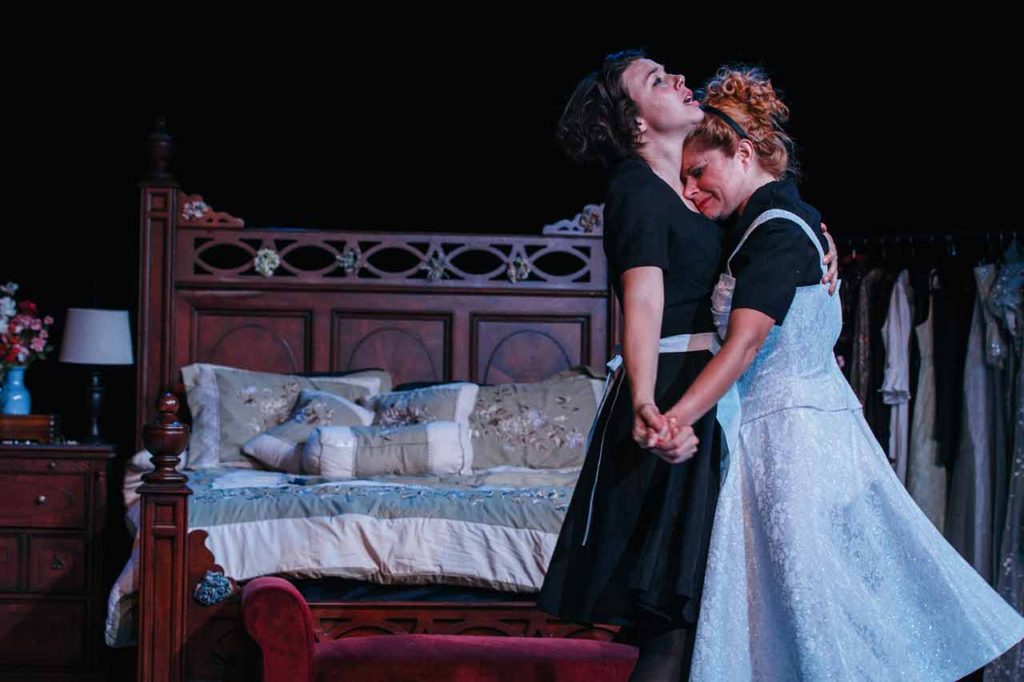 TAMPA – Solange and Claire, two sisters working as chamber maids, live in a tenuous reality, a place where their only comfort comes within the pampered confines of a boudoir, a sanctuary where they can secretly enact fantasies and plot revenge.

Over the course of 90 electric, mesmerizing minutes, the sisters engage in a series of increasingly dark exchanges, a ritualistic role-playing where each assumes the other’s identity, one girl always taking the dominant position of Madame, their haughty employer, whose backhanded compliments sting like the rake of barbed wire across tender flesh.

In the hands of a less disciplined director, “The Maids,” a play by Jean Genet, the famed French novelist, playwright and poet, could be reduced to little more than hollow titillation, the deeper context of Genet’s blistering dialogue overshadowed by an exultation of sexual taboos.

But David Jenkins, producing artistic director and co-founder of Jobsite Theater, knows exactly what he’s doing. He thrusts the audience into the unwitting role of co-conspirator and voyeur, and allows his magnificent trio of actors to shine.

Fans of French existentialism and psychosexual melodrama should devour “The Maids” and likely return for a second serving as Jobsite’s production continues through May 22 at the David A. Straz Jr. Center for the Performing Arts.

Jenkins’ masterfully underplays the crackling tension between Georgia Mallory Guy’s Solange and Katrina Stevenson’s Claire, opting to let the audience’s interpretation of the sisters’ lingering caresses and bated breath slowly ratchet the air inside the intimate Shimberg Playhouse until it is steaming with palpable desire and mounting dread.

Guy and Stevenson have an undeniable chemistry that cannot be artificially manufactured. Guy’s eyes, in particular, emote with urgency, longing and disgust, often in the same moment. And she and Stevenson make the most of the sparse stage, adorned with a poster bed, dresser, vanity and two wardrobes, often stopping to stare directly out at the audience, tempting spectators to succumb to their sinister charms.

At its core, “The Maids” is a multi-layered examination of class structure, of personal longing, of pent-up resentment and blooming mental illness. The line between fantasy and reality isn’t blurred but erased entirely within the first 15 minutes as the sisters conspire to poison their Madame after deliberately undermining her dalliance with a suitor.

They speak in cleverly coded safe words — reminding each other of “limits” and “boundaries” and not to get “carried away” — while imagining life outside the cramped attic quarters of the hired help.

When their employer finally returns to learn that her paramour has recently been released from jail, unaware that it was Claire who anonymously penned a letter that resulted in his arrest, Genet’s razor-sharp dialogue explodes in a torrent of jagged asides that allow Roxanne Fay as Madame to employ a hypnotic mix of sugary malice and caustic affection while never crossing over into camp.

In its final moments, Jenkins wisely surrenders the stage to Guy as she delivers a beautiful soliloquy full of defiance and naiveté, the tragic certainty of her actions seemingly exposed even as the audience is left to ponder whether any of it is actually true or real.

That’s the power of “The Maids” — it lingers long after the last light enveloping Solange goes dark, nothing but Genet’s deviant, deliciously ambiguous construct left to fuel spirited debate.