Long-time season passholder and ardent standing ovation-denier David Hood neverever minces words with how he feels about shows. That’s why we were particularly thrilled to have (mostly) escaped his ire with our current production of Dr. Jekyll & Mr. Hyde. He tagged us in this review on Facebook, which we asked if we could share with you all here:

Jekyll and Hyde is one of the best shows from Jobsite in a long while, one of the first in ages that feels like true old school Jobsite, no doubt due to the direction of Shawn Paonessa, a very long time Jobsite stalwart, and a man I’ve stood beside in the bathroom of a Paul McCartney concert in Orlando.

The cast are exemplary, though I have to admit that Giles is low key underutilized just playing Jekyll, after all he is the master of one man shows playing every role in a show and his beginning of the spontaneous transformations in the 2nd act just whets the audience appetite for what Giles could have done with Hyde.

One primary conceit of the script is having 4 actors represent Hyde, in what seems to be an attempt to represent different aspects of Hyde, though to be honest I didn’t find that worked as well as it was probably meant to, other than it being a different actor I didn’t find much difference in the Hydes. There were moments it worked very well, such as the 4 Hydes carrying the heavy bulk of Jekyll away and when it was necessary due to doubling, such as Jonelle-Hyde confronting Blake-Lanyon (more later) when he was in a critical non-Hyde role.

However the bulk of Hyde, and a fun Scottish doctor, is carried by Blake Smallen who is wonderful both as a lustful Hyde as well as a torturing evil brute. I don’t think I’d seen him on stage before and was very impressed. It seems he is a USF student, so he probably hates me when registration and OASIS are not working. 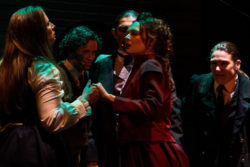 I’m guessing at this point nobody in the audience is surprised to find out that Hyde is actually Jekyll, so the script really doesn’t spend much time on that, rather starting in media res where Hyde is already terrorizing the city. It then travels into the interesting philosophical territory of how far will a “good man” go to preserve his reputation. SPOILER-PRETTY DAMN FAR!

The cast was up to the quadrupling (or more) of roles and in general it worked well with little confusion as to who was who.

The entire cast was really good, and luckily a small enough cast that I can call them out individually.

Giles Davies as Jekyll, I meant it’s Giles, probably the best actor in the area, and though his hair looked a little shorter than normal he was great as always and as I mentioned his spontaneous transformation leaves the audience wanting to have seen him do a bit of Hyde.

Brian Shea, who has for some reason purchased a middle name of Matthew did a fine job as sadistic, upper class, sexist bigot doctor, as well as straight laced investigator and other roles. I always enjoy Brian’s work and will always remember when he made the mistake of not going home with Girleen when he played Father Welch/Welsh.

Nicole Jeannine Smith was a fine Utterson. The familiarity between her and her client Jekyll (Giles Davies) was so good you’d swear they were a couple in real life.

Famous opera star Jonelle Meyer was great as Hyde’s man servant Poole and other than Blake has probably the biggest portion of Hyde and pulled it off well.

Blake Smallen as I singled out earlier was just fantastic as Dr. Lanyon and Hyde. 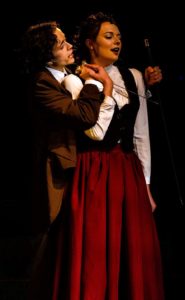 And finally, the maid in distress Taylor Tveten handles what must be the difficult role of Elizabeth very well. The role is a fairly isolated one primarily interacting only with Hyde and Jekyll.

This is another winner for Jobsite Halloween. I know that partaking in Halloween festivities will damn your mortal soul, but in this case it will be worth it.

Now the bad things:
Those chairs made my butt hurt.
No cookies!!
No in person pre-show speech from David Jenkins, just a cold recording, like he doesn’t love me anymore.
No pre-show music???
No great Frank Wildhorn score!

Editor’s note: we really do believe that there was house music prior to the Friday night performance, though it may have run out a few minutes before curtain. And we can’t wait to be able to hand out cookies again either, David.