After a shortened live run in the reconfigured-for-distance Jaeb Theater, Jobsite is happy to offer a digital stream of DOUBT: A Parable for a one-week run Feb. 5-11. This film, shot from multiple angles and edited by a crew of Straz Center staff,  will be accessible through strazhome.uscreen.io. Jobsite’s Nov. production of Anna Deavere Smith’s TWILIGHT: LOS ANGELES, 1992 will also get a one-week digital run starting Mar. 3, 30 years to the day from the even that acted as the catalyst for the LA uprisings — Rodney King’s beating by a group of police officers. 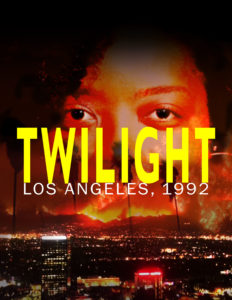 Both productions were highly lauded by critics and audiences (click the links above for reviews), not only for the quality of the work on stage but for the thorough commitment to health and safety throughout the facility. Straz Center has a seal of approval from TPRO, Tampa General Hospital’s consulting service, for reopening protocols and both Straz and Jobsite are recognized as a Safe & Sound business by the City of Tampa. Read more about all we are to protect audiences, staff, and artists.

Future digital releases — either full-length shows taped in front of a live audience or artist-generated shorts — are directly tied to the success of what the company has already invested in so heavily. Jobsite hopes the public supports these projects with rentals so that they can continue to be offered. Producing Artistic Director David M. Jenkins notes that “doing video is time-consuming and expensive — and we’re theater artists, not filmmakers. So, unless rentals can at least cover the cost of making these we’ll have no choice but to focus our limited resources toward the significantly higher costs of producing live theater in our current conditions.”