Nick sent me a DM over Twitter after we had a conversation about Dr. Ride’s American Beach House (must close Sun., Oct. 10!), asking if he wrote a guest blog would I publish it. Of course I would, and here it is:

I love being gay. 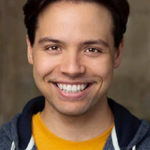 My name is written above this article, in the header. You can easily find me on the internet, or identify me publicly in pieces I have written or in shows I have been in. I have a public persona and a private persona. My public and private persona both involve announcing and celebrating my queerness. I proclaim this. I celebrate this. This feeling however, is not a universal feeling. Sexuality is not something that everyone feels is intrinsic to understanding who they are as an individual. I don’t prescribe to that. I am who I am and who I am is super gay – and knowing that about me is important.

Embracing my “super gay” was not something that happened over night. It came in levels and layers of experience and reconfiguration. Seeing “Danny Phantom” on Nickelodeon and recognizing that he makes you feel some type of way and not necessarily knowing why, but sitting directly next to that feeling is another one that says “don’t tell anyone.” And then maybe it’s the fifth grade and you really don’t know why you feel the need to show your new classmate that you are *in fact* the best at identifying each President of the United States, but you know that you feel this intense need and slight pleasure in impressing him.

Is this attraction? Denial is easy; it’s the first line of defense that your body uses to repress. But eventually this burgeoning feeling grows and you learn enough to put a word in your head. Gay. I don’t necessarily believe we need to put faith in labels, but I do put faith in feelings. If something feels true to who you are, then there isn’t anything wrong with putting a word on it.

Dr. Ride beautiful illustrates the in-betweeen – recognizing the feeling but not knowing the word to use. What Liza Birkenmeier addresses in Dr. Ride’s American Beach House is not shame. This is not a piece that tries to showcase internalized homophobia and guilt and how that is measured in different ways for different people. There are enough plays about all of the negative feelings and emotions that come with being queer, the adversity that is faced in micro and macro levels. 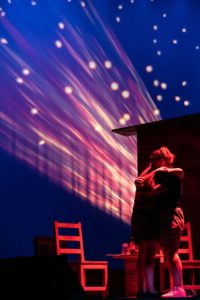 This is a play about a tiny seed of a feeling that sits in the pit of your stomach the moment you see something or someone that resonates with you but you don’t know why. The feeling of curiosity that burgeons when you begin to uncover something about yourself. Locking eyes with another queer person and at that very moment there is a mutual universe – someone that knows something that you know, and yet comes with their own curiosities. It’s as though you are from the same galaxy but a different star. But the characters in Dr. Ride don’t announce or celebrate their queerness because they’ve never been given the vocabulary or tools to discover this about themselves. It’s lovely. It’s sad. It’s innocent. It’s funny. It unearthed the feeling of remembering what it was like to be in-between acknowledging my queerness and then recognizing what it was. And whether or not I proclaim it publicly or privately, that feeling of self-recognition sits warmly with me.

I love being gay.