A note from Dr. Ride’s Director

Sent in today by Dr. Ride’s American Beach House director Roxanne Fay, who is also a Jobsite Artistic Associate and member of the board: 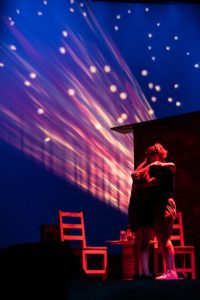 Sometimes the stars align “just right.”
I am writing this the morning of the second preview of Dr. Ride’s American Beach House.
This has been an amazing, positive journey for us as a company — the cast, designers, management and technical staff.
I have directed many shows in the past, a lot of them where I was sort of chef-cook-and-bottle-washer; directing, designing, even sometimes building the set. Having such skilled and generous design and tech support (including my first ever dramaturg, Tatiana Baccari) as I do at Jobsite is, above all, empowering. Not only am I free to concentrate in my area of the production, but the solid firmament under the show from day one affords me and the cast a confidence and a pride in the anticipated outcomes of the show.
Having this support and time to focus gave me the gift of delving into these marvelous characters with the actors both one on one and with each other. I simply could not have asked for a more gifted cast. Their willingness to “go there,” to try things, to talk in depth about the human-ness of this piece was so crucial to successfully breathing life into the beautiful women Liza Birkenmeier has given us to create.
I am thrilled that Liza will be able to see our production and that we are fortunate enough to be the first production of the show outside its 2019 New York premiere. I know we are but the first of many. This piece is good, y’all.
Now I find myself in that moment that brings directors both joy and sadness: the moment of letting go.
As we open the show, I give it to my cast and staff. It belongs to them now and I know that in their hands, our story is ‘just right.’

ROXANNE FAY is an actor, playwright and Artistic Director of Circle in The Water. As a playwright, Roxanne has been awarded a 2022 residency by the Hosking House Trust in Stratford Upon Avon, UK, to complete work on her Shakespeare inspired play, The Deeds Of Mercy. She was named a 2016 Hawthornden Writers’ Fellow (artist in residence, Hawthornden Castle, Scotland). Her play, Thrice To Mine (created at Hawthornden) premiered in New York in 2019. Roxanne received the 2017 Creative Pinellas Individual Artist Fellowship and regularly creates new works for the Dali Museum in St. Petersburg. Roxanne’s first film, Breton And The Muse: A Midnight In Paris, was a focal point of the Dali’s acclaimed exhibition coordinated with Le Centre Pompidou (Paris). As an actor, Roxanne has received regional awards and acclaim for her work with Jobsite Theater in Doubt, The Tempest, Twelfth Night, As You Like It, Much Ado About Nothing, and HIR (named one of the best performances of the decade by Broadway World in 2019). Other roles include Dr. Emma Brookner in The Normal Heart and Nurse Ratched in One Flew Over The Cuckoo’s Nest, (Freefall Theatre,FL), Leni Riefenstahl in Leni, Beatrice in The Effect Of Gamma Rays On Man-In-The-Moon Marigolds, and coming in fall 2021, Mary Tyrone in Long Day’s Journey Into Night (Bridge Street Theatre, NY).