Jobsite is sort of a weird name for a theater. We understand. There, I ripped off the band-aid.

But you know what? So is Steppenwolf. And Woolly Mammoth. I could keep going … and I don’t even mean any disrespect.

A lot of folks wonder why we’re named what we are, but few are brave enough to ask — in fear of appearing rude I guess? I had an outdoor meeting with some folks relatively new in town who want to support us and proactively told the story, and they admitted they wondered why but weren’t going to ask.

So, I may as well lay it down here for everyone.

In the fall of 1998 my dear friend Mike Caban and I started talking about putting up a show. Maybe starting a company. We attended undergrad together and reconnected after three years going our own ways in the world but both ending up back in Tampa.

A manifesto of sorts started to emerge. On scrap paper, on bar napkins, in late night conversations with whomever would listen.

Mike and I agreed we wanted for a blue-collar ethic and aesthetic. Theater for regular people. People like us. Theater for the people here in Tampa, a pretty blue-collar spot even to this day. There weren’t a lot of options in town at the time, and somehow it all felt a little high-falutin’ for us to feel at home anywhere.

So, we decided to do something about it. 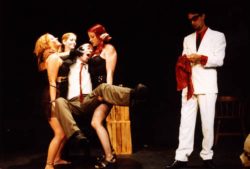 The theater we wanted was rough and immediate, poor and political. We talked about theater for people who weren’t theater people but who you were more likely to see at The Castle or Covivant Gallery, Blue Chair Music or the Oak Barrel. We wanted to demystify theatrical illusion, we want to engage people and hopefully make them better citizens. We wanted an ensemble theater, a theater by and for artists. For the theater nerds out there we were mainlining the theories of Brecht, Artaud, Brook, and Grotowski.

We had nothing but grit, spit, and sweat to get any of this done. We begged, we borrowed, we stole, we maxed our credit cards. 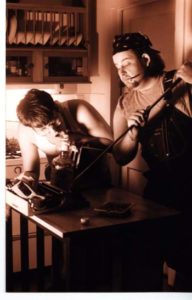 We didn’t have a space and couldn’t find one willing to rent to us (that was anywhere near our price range — I’m looking at you, Cuban Club). So, we decided we’d just roam, calling ourselves “theatrical mercenaries,” resigning ourselves to found space and site-specific work.

Wherever we landed, to borrow a construction term, would be the jobsite — until it was time to move on to the next.

And, voila, there the name Jobsite was born.

But why? And to what? A name like Tampa Actors’ Ensemble or Cigar City Theater Collective might sound more connected to the area or ring with some kind of legitimacy to folks who don’t know us — but at the end of the day we’d still be Jobsite.

If you know, you know.

And now you know.

I like the name as an enduring reminder of where we came from and what we wanted. That’s naturally shifted in some ways  over the years, and will surely continue to shift as our artists and world shifts, but I hope no matter what — long after I’m gone — that Jobsite’s still Jobsite