Thanks to German Radio’s Susanne Neilsen for stopping by the show to talk about it on air and in print! Here is her review, translated into English:

Jobsite Theater’s Arturo Ui finally opens with many more autocrats (than the originally planned focus in 2019) in the world of news! And congratulations are in order to both the author and the Jobsite theater chosing this play -for this is perfect timing. The play is a contemporary farce, exaggerating characters as they are staged and wonderfully performed, especially by this set of Jobsite Theater company players, making us think of a whole range of contemporary, and, of course, the original historic inspiration, dictators of the past. 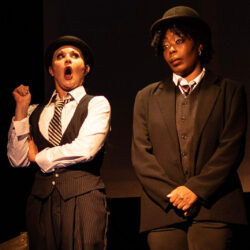 A bit like all gangsters and political rulers, from the smallest gang leader to the presidents of a nations, there are quite a lot of such powerful men in the world today. And so we recognize in the rise and the dark dealings on stage those from now all the way back to THE historical figure that inspired Brecht in 1941 and whom the author had exposed early on from his exile. Now, in 2022,plenty of others have come along, whose rises are just as powerful and their methods and efforts to expand their territories, both ideological and geographical, continue to be the stuff of headlines around the globe. 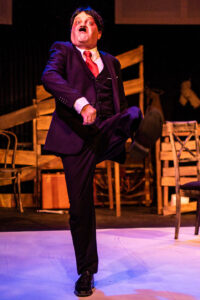 Derrick Phillips as Brecht’s hero Arturo UI, yes, in a black wig and mustache, is perfect, facial expressions and gestures are, of course, particularly special in the scene where Arturo, coached by the character of a second-rate actress, is learning the impressive manipulation of the populous. This body language of leaders can be beautifully observed in films showing us from the Duce to (the) Donald how amazingly similar it is in all these autocrats! 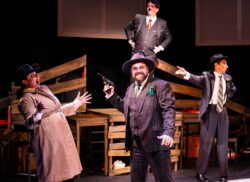 Ernesto Roma, in a pinstripe suit, fits into the first scene where all the actors present themselves as business people, then in the gangster scene the characters appear much more aggressive (which in Brecht of course characterized the German rulers, who were easily recognizable by their names and behavior, and finally “Wolf-in-Sheep’s-clothing”, namely as a prosecutor in the courtroom, where a fall guy for the crime is needed and, undoubtedly,  found. 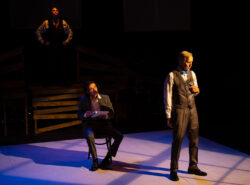 The whole story is set in the vegetable business, but the parallels of running the country through shady deals in politics are obvious, and even if you read the plot before attending this performance, don’t worry, everything unmistakably takes its course right up to the absolute Rise of Arturo Ui, who in all his actions provides wonderful parallels to current events and history. The red armbands, however, indicate the most famous Fuehrer, emotionally synonymous with the (evocation of) greatest terror. Even if this is all about cauliflower, we already know who our gangsters are.

Bravo to the versatile and wonderful actors of the Jobsite Theater, experienced and well-known from Shakespeare to the most far-out comedy, like last year’s Struwwelpeter, Shockheaded Peter.

Thank you to Director David Jenkins for offering us this wide range of works!

It will be interesting to see what comes next.

The play runs through June 5, 2022 at the Straz Center’s Shimberg Theater, 813-229-STAR masks are recommended and Covidpasses are no longer checked. Programs can be read on mobile phones via QR code in the theater.