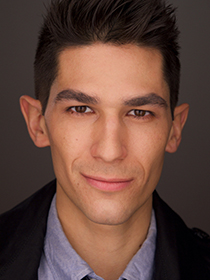 Omen Sade [he/him] is a theater artist based in Lakeland, and is delighted to be joining Jobsite for the first time. Sade is a graduate of the Jacques Lecoq Theater School in Paris; he studied clown and commedia dell’arte at the Accademia Dell’Arte in Arezzo, Italy, classical theater at BADA in London, and worked with mask theater troupe Teatro Punto in Amsterdam. Favorite past roles include Arlecchino (Servant of Two Masters, Piccolo Theater Chicago), Tranio (Taming of the Shrew, STONC), Vikram (Corpse Backpack, Pipeline Theater, NYC), and Mercutio in WallByrd’s Romeo and Juliet.  Omen co-wrote and performed in BDP Trea$ure Island and BDP Peter Pan, which gained nine nominations from Broadway World. His original Sci-Fi work, SOMNIUM, at RIT/NTID was awarded a Special Achievement in Innovative Use of Technology and a commendation for Conception and Direction by the Kennedy Center 2021 American College Theater Festival. Omen can be heard weekly on the Talk Tull to Me Podcast and the Last Call Trivia Podcast. Follow @omen.sade