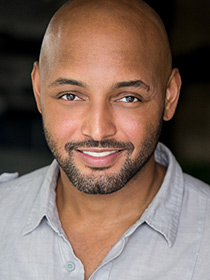 DeQuan Mitchell is from Columbus, OH, where he studied dance and theater at the Fort Hayes Arts School. He moved to Tampa in 2001, where he began his professional performance career as a dancer, which took him around the world performing in many corporate entrainment shows, major sporting events, and numerous television appearances. DeQuan currently works freelance as a dancer, choreographer, actor, model, singer, and personal trainer. He is honored to be involved in telling these stories.