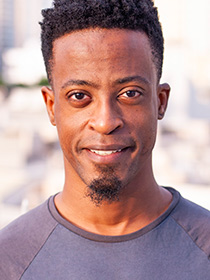 Patrick A. Jackson is thrilled to be making his Jobsite debut. He is a native of Richmond, VA. Recent Credits include: Gloria (Mad Cow Theatre), A Raisin In The Sun (American Stage), White Rabbit Red Rabbit (Urbanite Theatre); Alice With A Twist, Androcles And The Lion, and The Frog Prince (Florida Studio Theatre). Off stage, Patrick is the Education & Improv Associate at American Stage and also a founding member of Definitely Not Murderers, the theatre’s musical improv team. He studied with the British American Drama Academy and is a proud alumnus of Morehouse College. Outside of theatre and performance, Patrick is the Vice President of the Board of Directors for Today’s Church Tampa Bay. Patrick would like to thank his family, friends, and “village” for their continued support. GOMAB. OASAASLLS.