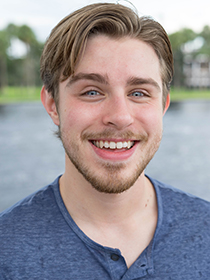 And Then There Were None, Noises Off, Laughing Stock, 12 Angry Men. Evan has spent the past 10 years developing a sincere fondness for playing characters and being professionally goofy in the Tampa Bay Area. He articulates his crippling self-awareness via standup comedy and works as a videographer for a crime scene cleanup company. He dedicates his performance to his late betta fish, Karamo.