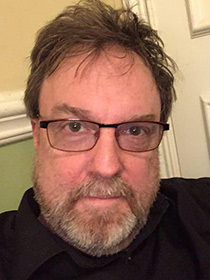 Stuart Fail began directing twenty-five years ago. He has worked with theatres in Los Angeles, Atlanta, Minneapolis, New York, Dorset, England and Tampa. Some of his directing credits include: Andrea’s Got Two Boyfriends, Orphans, Hurlyburly, A Life in the Theatre, The Rise and Rise of Daniel Rocket, Independence, The Artificial Jungle, Burn This, Twelfth Night, King John.

Stuart’s plays have been produced in Atlanta, Los Angeles and Minneapolis. Stuart’s play Consider the Lilies was Stuart’s first New York Off-Broadway production. The play was performed at the Barrow Group Theatre in January 2017. Stuart holds an MFA in Screenwriting from UCLA’s Theatre, Film and Television program, and an MFA in Theatre Arts: Directing from Minnesota State University. Stuart is thrilled for his first experience with Jobsite. But this is not Stuart’s first play with Jobsite Theatre’s Producing Artistic Director, David Jenkins. The two of them worked together on Crimes of the Heart in the Cayman Islands when they both had more hair.