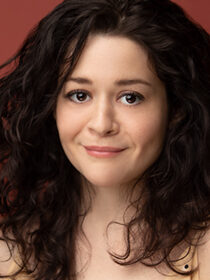 Carla Corvo is an American actor of Cuban descent, thrilled to be making her Jobsite debut! Carla recently relocated to Tampa after spending 17 years as an NYC resident. She made her feature film debut opposite Leonardo DiCaprio and Jonah Hill in Martin Scorsese’s The Wolf of Wall Street. Other TV/Film credits include: Orange is the New Black (opposite Lori Petty), Louie (opposite Louis CK) and The Suspect (opposite Sterling K. Brown). Carla holds a BFA from NYU Tisch School of the Arts (Playwrights Horizons, RADA and Stonestreet). She has worked regionally at Williamstown, Hangar, Two River and Asolo Rep. In 2020 she graduated with her MFA from the FSU/Asolo Conservatory. Favorite grad school credits include: Arcadia, Ghosts, Reckless and R + J. In addition to stage/screen, she is a voiceover artist and Audie nominated narrator with 13+ titles for Penguin Random House Audio. The Straz holds a special place in her heart as it is where she first pursued the stage and currently works on staff full-time in development as the special events coordinator. Proud member SAG-AFTRA. For Pipo and Trixie.