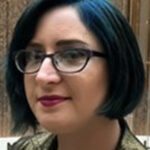 Anne Acosta[she/her] is a proud graduate of the University of South Florida’s School of Theatre and Dance, having earned her B.A. in Theatre Design (Costume Concentration) in 2021. While there, she designed her first show Magnetic North, a livestream event penned by director Helen Tennison. The following fall she served as adjunct at her alma mater and designed the Fall 2021 explosive double-bill of Dutchman/ The Owl Answers by LeRoi Jones/Amiri Baraka and Adrienne Kennedy (respectively) and directed by Clareann Despain. She has since gone on to serve as costume designer for Little Shop of Horrors and Nunsense, both Straz Produced shows directed by David M. Jenkins and Alison Burns-Jackson (respectively) and Patel Conservatory’s Cinderella. She thanks her husband and mother (you guessed it, respectively) for their support.