We’re wrapping up the second week of rehearsals for Macbeth, and I find myself getting more and more excited with each passing day.

There’s a lot here for me to be stoked about:  I love Shakespeare, I love Halloween, I love this play and the world it’s set in, I love this group of artists …

As people see the great PR photos that Crawford Long shot, I get the usual questions I’m growing more and more accustomed to when we take on the Bard. When and where are we setting it? Is it still Shakespeare’s words or did we adapt it to modern language? How are 8 people doing the whole play? Is it going to be super gory? 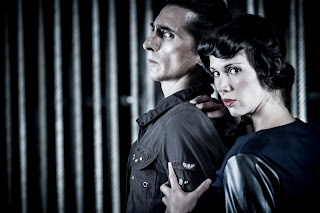 It’s becoming habit for me to take to this blog to dump answers out in one place in order to help give folks a better idea of what we’re up to.

The world of the play
We’re setting it in what we’re referring to as a modern fantasy world.  One where LED flashlights and handguns can exist next to daggers and cauldrons. Doc Martens. Pea coats. Wands. Lanterns. Militaryesque garments that do not signify any particular nation or period in our own human history. I was loathe to set it truly modern, because I’m not trying to make a political statement about current events. Setting it in Vietnam or WWII would equally be making a statement I’m not interested in. I wasn’t interested in setting it in a distant past either, because I feared some in the audience might not allow themselves to connect to it. I wanted it to feel a bit more immediate. Katrina Stevenson has been visually inspired by a lot of the cuts and fabrics used in Dr. Who and Torchwood. I’m a bit inspired by how the re-imagining of Battlestar Galactica managed to look both futuristic and present at the same time.

It’s a world where magic is as real as science. Where polytheist religions coexist with monotheism and each accepts the other as real.

The text
I think we’ve been messing with everyone’s heads since we premiered Pericles: Prince of Tires which was based on Pericles, Prince of Tyre a few years back. That show was a 100% musical modernization of Shakespeare’s plot, with essentially only one speech kept verbatim in Shakespeare’s verse. This is not one of those productions. Pericles was truly the only time we’ve done Shakespeare and not used his words. Our productions of Titus Andronicus, The Taming of the Shrew, Much Ado About Nothing — these were all his plays, albeit with some heavy cutting.  Macbeth is the same. I unapologetically took a machete to it, I believe I’ve cut about an hour out of it to accomplish several things.

My initial idea was to have it play at an hour and a half with no intermission. In, out. Whiz, bang. I’m not sure that it will run at that time any more, but I am positive no matter what it will play in under 2 hours even if we need to take an intermission. What did I cut? A lot of the political intrigue that was far more meaningful in 1611 when it premiered than any of us care about (or have the context for) today. A lot of the boot-licking thrown in there for King James (a descendant of Malcolm II, left king at the end of the play). Some of the stuff I just find generally offensive (which was the norm for the day but there’s no need to keep perpetuating it).

A major intervention I’ve done is to beef up the presence of Lady Macduff.  Shakespeare does this weird thing where he sets up this great character in Macduff, then in the middle of Act IV introduces his wife for a hot sec before killing her off which sends Macduff into a further rage. His anger isn’t just for his friends and his country, but he now has a personal score to settle. I also have this idea of showing the Macbeths and Macduffs from the start as contrasting couples. Both tragic in their own way. An easy way to show the collapse of the Macbeths as a couple is to stand them next to another partnership, which doesn’t really exist in Shakespeare’s original.

So, to fix all this I’ve created a silent beginning to the show where we see both couples together as the men prepare to go off to war. Then I’ve added Lady Macduff into the play earlier. She arrives at castle Macbeth to celebrate the end of the war with her guy Macduff. It was pretty easy to take lines away from Lennox, who accompanies Macduff in the original, and so now Lady Macduff is present and next to her counterpart in Lady Macbeth in scenes prior to and after Duncan’s murder. THEN she goes back to Fife and reappears in Act IV. And now we have a reason to care about her, and about the relationship. 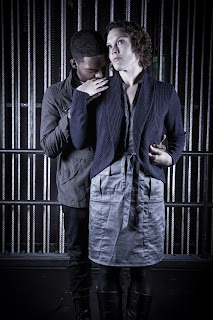 This whole 8-person cast deal
The Macbeths and Macduffs are central to the story here that we’re trying to tell. And that leaves 4 other actors to do everything else: servants, witches, assassins, apparitions, other random Lords, Duncan, Malcolm, Banquo, and so on. 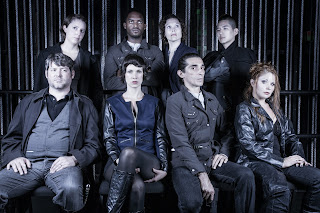 It’s a popular convention with smaller theaters, or at least for companies with smaller spaces and budgets, to have one actor play a lot of smaller parts in a show. Toss on a mustache here or a hat there (voila!) and the audience is kind enough to accept that this person is now another character. I’ve employed the device many times, and I am sure I’ll do it again.

Very early on, when considering this title, I looked at Schechner’s Makbeth, an “update” of the original, where he focuses on central characters — Macbeths, Macduff, Banquo, Duncan and Malcolm — and then has “Dark Powers” who are essentially the witches among others. There were enough issues for me with that treatment to steer me away from using it, but there was something about his idea of having these forces always looming about. I’ve seen a production of Macbeth where the witches never left stage, and that image also kept coming back to me.

Within the text there are countless times where characters call out to Gods or spirits or some form of otherworldly power and so all of this together really struck me as an opportunity: not only to make it integral to my concept that I would use a small group of actors to play a multitude of roles, but also to put even more focus on contrasting the Macbeths and Macduffs, and also to make manifest the spiritual elements referred to on almost every page of the text. Enter what I refer to as the Powers (in contrast to Schechner’s Dark Powers). 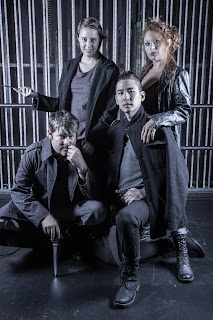 We’re playing with a more neutral approach than “dark.” They are more ambivalent. These four actors are perched at the cardinal points of the stage – shifting into and out of the playing area to assume roles, silently communicating with each other as the events of the play unfold, always watching and reacting even when not active in a scene. They operate as primordial elemental forces on the borders, as very real and present persons when in contact with the Macbeths and Macduffs, and as what Macbeth wants to see in the form of witches or apparitions.

We’ll signify the changes from character to character with simple additions to costume, things actors can pull out of pockets like a pair of glasses for the Doctor or a scarf for a Murderer, and through the actors’ use of voice and body. The effect is already chilling, fascinating to watch. To help lessen the confusion we’ve also merged several characters under one character name. For instance Maggie plays essentially every servant and messenger that comes in as one person. Chris and Kat have lines from many of the other Lords that appear in the play which they are playing solely as Lennox and Ross, respectively. Nothing about the story is really lost here.

There are also some pretty neat moments on stage where we have only the Powers talking to one another through character’s mouthpieces, when none of the Macbeths or Macduffs are on stage, and it allows us to do this sort of Brechtian epic theater thing. And that, to a degree, goes back to the strength that comes from just embracing this choice. We all know we’re in a theater watching a play. We all know that we end up needing actors to cover more than one role when we do Shakespeare (or any large cast play). Why not just embrace all of this from the start and make it part of the show instead of being apologetic about it begging the audience to suspend disbelief further?

I’m so super pumped. 🙂 I hope you are, too. Tickets are already blazing (Sat. 11/2 is already sold out), I fully expect another sold out run. I’m not sure that we’ve ever started a season with two productions back to back poised for sold-out runs. Crazy. Thankful.

Oh, and is it going to be super gory? Not really. We’re more about a selective use of blood for great effect rather than turning the theater into a giant grisly Slip and Slide.