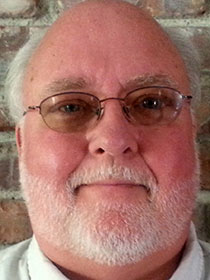 Tom has been active in musical theater since the late 70s. In that time, he has conducted, music directed, or played keyboards for over 100 musicals. Tom’s real focus has always been composing. Some highlights: “Prelude and Fugue” was performed by the Chicago Symphony Orchestra in 1981. “Golub,” a documentary film produced by Kartemquin Films (w/score by Tom) premiered at the 1985 NY Film Festival. Sci-fi parody musical, “The Brain That Wouldn’t Die! In 3-D!!!” premiered in the 2011 New York Musical Theater Festival, and won the coveted Mikey Award. His most recent musical, Sunshine City was performed at the Palladium in St Petersburg last month in a staged reading funded by the St Petersburg Arts Alliance. He is currently working on a comic chamber opera, “Doctor Dilligaff’s Baboon.”