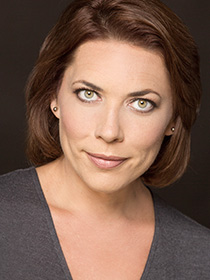 Becca McCoy has performed nationwide in Motherhood the Musical and Menopause the Musical, and was last seen at the Straz Center as Sleeping Beauty in Disenchanted!, for which she won the Broadway World Tampa award for Best Featured Actress in a Musical. Regional theatre credits include: A Moon for the Misbegotten (Josie – Illinois Theatre Center, IL), Seussical (Sour Kangaroo – Chicago Shakespeare Theatre, IL), Spamalot (Lady of the Lake – American Stage, FL, Theatre Tampa Bay Award Nomination), The Night of the Iguana (Frau Fahrenkopf – Palm Beach Dramaworks, FL), Church Basement Ladies (Mavis – Merry-Go-Round Theatre, NY), and Man of La Mancha (Housekeeper – The Wick Theatre, FL). Becca attended the British American Drama Academy in Oxford where she was one of 13 people selected that term to study directly with John Barton, founder of the Royal Shakespeare Company. Her previous Shakespeare credits in Tampa Bay include Love’s Labour’s Lost (Princess of France – American Stage in the Park), Comedy of Errors (The Abbess – freeFall Theatre), and Macbeth (Macduff – Alley Cat Players). Becca is a member of SAG-AFTRA and a proud 12-year member of Actors’ Equity Association.
Artist's Website