(ed. note: Jess took great initiative in putting this together. All I had to do was upload it. Sweet! -dj)

All My Children: Imaginary and Allegorical –OR– Is My Character Completely Insane?

Upon my first read of the script for And Baby Makes Seven, I was struck with a question and a conundrum: Is my character (Ruth) absolutely off her rocker? And, if so, how will the audience relate to her? The conclusion I reached can best be explained by quoting the great Gene Wilder as Willy Wonka:

“A little madness now and then is relished in the wisest man.”

Ruth’s view of the world could be construed as crazy in some circles. But what do we deem to be crazy to us? Something so far outside our comfort zone that we don’t know how to relate to it? I beg that Ruth’s particular brand of crazy isn’t so much insanity, but a quirky adherence to the playful nature of childhood-gone-by. She just never put her imaginary friends in the closest like most of us did, gathering dust next to our My Little Ponies and (in my case) She-Ra Princess of Power dolls. In fact, she expanded on her imaginary friends, making them these mythic, allegorical figures that she uses as forms of expression when her reality starts to overwhelm her. Ruth’s imaginary children are not just imaginary; they have touches of real life literary and pop-culture references that have meaning and substance.

Take Henri (one of Ruth’s imaginary children), he is a fleshed out version of the little boy in the 1956 French film La Balloon Rouge (The Red Balloon). But Henri also has a penchant for Maurice Chevalier hits and he quotes John Dunne. As an actor, I sometimes see Ruth as a player, so deeply invested in her characters that they are constantly evolving, staying relevant, and fighting for their true objectives. She does her research and nothing is extraneous or without meaning. Take one of her scenes as Orphan (her other imaginary child). I won’t give it away, for those of you who haven’t seen the show yet (WHY oh WHY have you not seen it yet!?), but Orphan is in a dire and intense situation. To illustrate his state, Ruth has drawn on several figures from the literary world either on the cusp of death, destruction, or loss of their mind. (Jess puts on her English Literature nerd glasses): the following is a list of characters Orphan references in that scene, if you can pick out which lines belong to which character when you see the show … I will give you a high five and let you run in my geek pack:

Regan – The Exorcist we all know what this movie is about now, don’t we?

Othello – Othello before he kills Desdemona

Oswald – Henrik Ibsen’s Ghosts before he succumbs to neuro-syphilis

Ophelia – Hamlet after she has gone mad

Oswald – King Lear after he is killed by Edgar

Lady Macbeth – Macbeth after she has gone mad

And a few fun musical references: Lassie, Chattanooga Choo-choo, I am the Walrus

Ruth turns her imaginary children into vehicles that explain larger issues she feels passionate about or can’t relate to any other way but through her children. This is why I believe her children to be allegorical. To reference good ‘ol Webster’s definition of allegory: expression by means of symbolic fictional figures and actions of truths or generalizations about human existence. Her version of play is fraught with depth and meaning. Before I can ever let myself judge Ruth for her particular brand of crazy, I have to think about two things:

1. I play make-believe for a living. That’s … kind of insane.

2. What is so wrong with never letting go of our child-like sense of play?

The real issue comes when your playtime prevents you from dealing with responsibilities in the real world. I believe that Paula Vogel does a wonderful job of writing some scenes that help us get to know Ruth (without the mask of Henri and Orphan) and realize why she is the way she is. I hope that my portrayal of her will help you understand this frightfully wonderful, loving, and complicated woman.

To close, I will share with you the piece of Ruth I found in myself. As a child of about three or four, I had an imaginary character that I embodied; much like Ruth embodies her imaginary children. I, also like Ruth, drew on my pop-culture reference of the time: Disney. Princess Aurora (the princess in Disney’s Sleeping Beauty) was my alter ego and I fully lived in her reality. (see photo of me as Princess Aurora below) My mother tells me my voice and mannerisms would change and I would express irritation and not respond to the name Jessica. Being a bit of a rough and tumble tomboy, Princess Aurora was my way of being girly, feeling important and regal, and escaping from the reality of Jessica. But, like Ruth, I always became Jessica again in the end. My parents wrung their hands with worry…is our daughter insane? Schizophrenic? 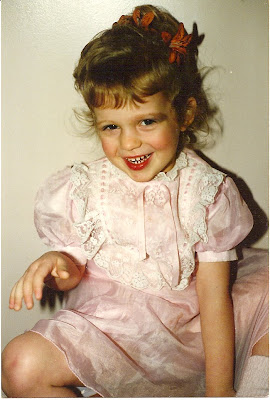 No mom and dad. I was just destined to be an actor.