Jobsite continues the 2016-17 season with their third co-production with the Straz Center in the Jaeb Theater (Return to the Forbidden Planet, Silence! The Musical). Bay Area audiences are in for another just-in-time-for-Halloween treat with the Drama Desk Award-nominated LIZZIE, a killer rock musical that is taking the nation by storm.

Four ferocious women front a savage six-piece rock band to tell the story of Lizzie Borden, America’s favorite double axe-murderess and Victorian hometown girl-next-door. In 1892 on a sweltering August day in a small New England town, a well-to-do-elderly man and his second wife were brutally murdered with an axe in broad daylight. Lizzie Borden, their youngest daughter, was the prime suspect. She was arrested and tried for the crime, but, with no actual witnesses to the hideous event, was acquitted. 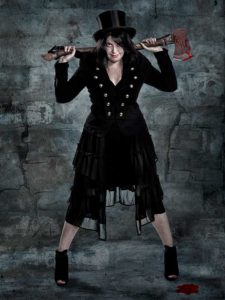 “It’s rare for show tunes to require this much intellectual engagement, but every turn of phrase is a revelation … Musically, visually, and storywise, LIZZIE is the next generation mash-up of Spring Awakening and Hedwig and the Angry Inch that will surely be packing in the audiences, young and old” – WQED, San Francisco

The murders remain unsolved making Borden an enduring pop culture icon to this day. History tells us Lizzie was innocent, but the legend as still chanted in schoolyards and playgrounds to this day leaves no doubt about her guilt. Full of hot rock licks, riot-grrrl attitude, and gleeful gallows humor, LIZZIE has made Top 10 lists in New York, Portland, Seattle, San Francisco, Houston, and is now ready to rock Tampa!

LIZZIE, whose creators describe as “an epic rock concept album come to life on stage” debuted at the Living Theater in New York in 2009. Ralph Remington, former director of the theater division of the NEA called Hamilton, Here Lies Love, and LIZZIE “the future of the American musical. Get ready.”

“A gothic rock ritual with a riot-grrrl attitude … an eerie hybrid of rock club and a turn-of-the-century New England parlor.” – The New York Times