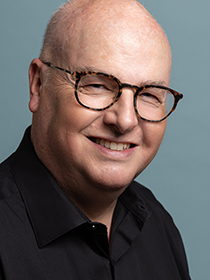 David Warner [he/him] is thrilled to be making his Jobsite debut in Romeo and Juliet. A member of the Radio Theatre Project acting ensemble at St. Petersburg’s Studio@620, he has also appeared locally with Stageworks (The Chosen) and Gulfport Community Players (Parfumerie, The Business of Murder) and spent many years acting and directing in Philadelphia-area theater. A graduate of Harvard and Villanova, where he received an M.A. in theater, he was also a National Arts Journalism Fellow at Columbia University, where he studied with Anne Bogart. A writer and editor for Registry Tampa Bay Sarasota Magazine and Creative Loafing, he lives with his husband, Larry Biddle, in St. Petersburg.