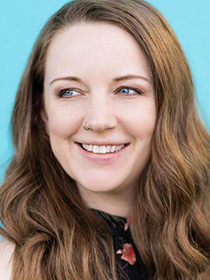 Regional singer-songwriter and accidental quadruple-threat Kasondra Rose is thrilled to be performing again with Jobsite Theater! Her previous theater credits include Jobsite’s record-smashing production of Midsummer Night’s Dream, the original cast of Crash Club, which premiered in West Michigan and was choreographed by Emmy Award-winner Joshua Bergasse, and ensemble roles in shows including A Chorus Line, Music Man, South Pacific, and Carousel. She tap danced in an off-Off-Broadway production in New York and toured Europe as a dancer before making her way down to the Tampa Bay area where she’s become an accomplished vocalist. In addition to being selected for Cirque-du-Soleil’s casting database as “usable vocal talent,” Kasondra has released three albums of original music and has played shows in dozens of cities including Nashville, Chicago, and St. Louis; she’s also a proud member of the Florida Bjorkestra! Over the summer, she was honored to be commissioned by Jobsite to create an original piece of work (aerial silks performance and original music/vocal composition) for their Digital Shorts series. When she’s not performing or training on aerial silks, Kasondra likes to sit at her desk and feel anxious.