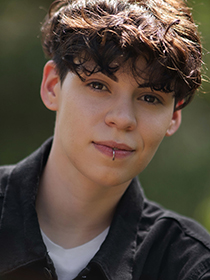 Newt Rametta [he/him, she/her] is a born and raised Tampa actor. He graduated from Howard W. Blake high school with a Master Certification in Theatre Arts and began performing in community projects such as All My Sons and Agnes of God as well as local performance group, Crazy Ransome Happenstance. After participating in Universal Orlando’s Halloween Horror Nights, he moved to Orlando to pursue a costume career at the Disney theme parks. Then, when some unforeseen circumstances arose, he moved back to Tampa eager to get back on the stage. He is ecstatic to play as his middle school dream role.