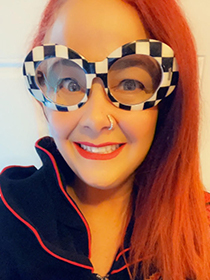 Randi Meyer went to USF and got her BA degrees in Anthropology and Humanities. After graduating, she started her career living in Borneo, Indonesia researching orangutans with the world-renowned primatologist Birute Galdikas. Birute is one of the Trimates, a name given to the three women – Jane Goodall, Dian Fossey, and Birute – chosen by Louis Leakey to study hominids in their natural habitat. Randi spent years living in Borneo as a research scientist with Birute but while studying the orangutans, she was unable to ignore the constant sights and smells of the rainforest burning down at an alarming rate. So, she changed her career from research scientist to being a leader in conservation education. Since moving back to the states, Randi has spent the majority of her career in executive education positions at nonprofit science museums, state parks, zoos and aquariums.

In her spare time, Randi likes to SCUBA dive, rollerblade, hike in nature, collect vinyl, fight for equality, dance (terribly), fly planes, and enjoy all aspects of the arts. She also loves to travel and has been to over 68 countries, mostly developing ones. During her travels, she seeks out every off-the-beaten-path adventure and she loves to interact with the locals. Randi has a motley cabal at her St. Petersburg home that includes 2 rabbits, a mean, misunderstood cat, and a handful of fish, all adopted.

Randi went to Jobsite the first season it opened and has been hooked ever since! She is elated to be on the board and to help educate others on this absolute diamond we have in the Tampa Bay area.