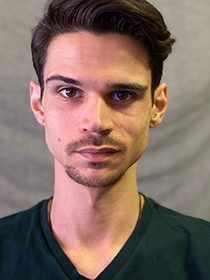 Robert Spence Gabriel is a Latino actor from Tampa, Florida. He attended the Theatre Conservatory of Chicago College of Performing arts. He recently returned home from Roanoke, Virginia where he played the (Piraguero) in Lin Manuel Miranda’s In The Heights. Robert has been seen in past Jobsite productions such as The Threepenny Opera (Jake), Hir (Isaac), and Romeo and Juliet (Paris). Other Local Credits: The Lion In Winter (Prince John; Freefall Theatre), War of the Worlds (Featured Singer; Freefall Theatre). Chicago credits: Next Thing You Know (Luke); Elegies For Angels, Punks, and Raging Queens (Brian/Featured Singer).